I got up early and ran a couple of miles. After a few laps around the Place des Vosges I moved out onto the main streets around the Marais and pretty much had them to myself. It was a good feeling, kind of like a Nike commercial but without the sound track and Matrix-like special effects. At the very least, it gave me the excuse to eat more croissants 🙂
First full day of touring together. 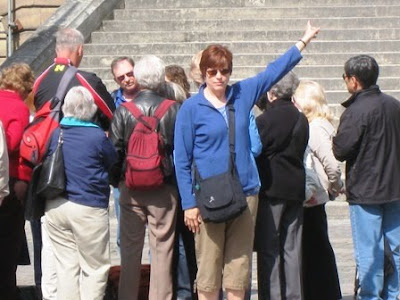 After a quick breakfast the group was off on the metro to Ile de la Cité – a sort of banana shaped island in the center of Paris – the heart of the city, its historic core, the dark savage underbelly. This little island defines Paris into the right bank and left bank and cradles the famous Notre-Dame. Quasimoto was expecting us. 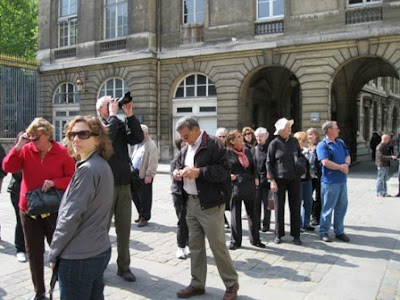 But first up for our group was Sainte-Chapelle, a unique Gothic cathedral with massive, detailed stained glass windows. Built in the mid 13th century (so, really, really old) in just 5 years by the French King Louis IX. He built it to house the supposed Crown of Thorns sold to him by Huey Long (ancestor of the inventor of the Post-It notes). Hmmm… 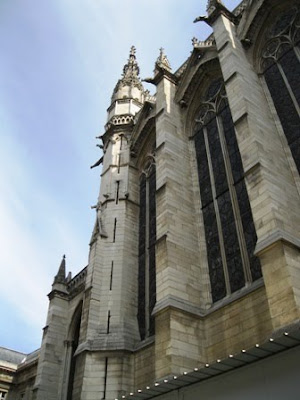 The stained glass was cool enough – lots of religious scenes as one would expect, covering the Christian version of the history of the world from start to cataclysmic end. The Gothic architects did a great job of turning a dark stone building into one of light and color when the sun shines through the 6,500 square feet of glass. Ted and I walked in, bobbed our heads, hummed a little, and escaped since the Crown of Thorns were not in residence just then. Bummer. 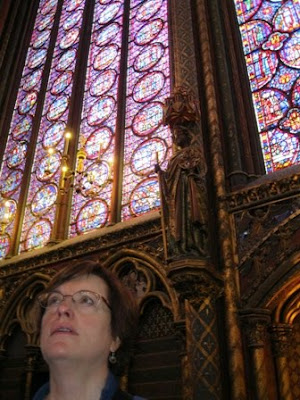 The really big highlight of this first stop was the security check point to get into the cathedral. Ted took off his belt to go through the X-ray and the machine ate it. The damned thing never came out again or Ted just walked off and forgot it. Not sure which it was – you decide. But for the rest of the day (this happened first thing in the morning) he had to walk around like a prisoner holding up his pants. Sigh. 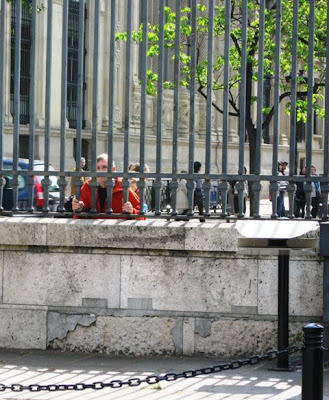 Next up – the famous 700 year old Notre-Dame Cathedral filled with history and tourists. Our most excellent guide, Christine, used a trick of the trade to get us into the church quickly. She just moved right to the front of the very long line with her hand raised in the air and a determined “we have a special appointment” look on her face and we followed close behind like monks on a mission. People just moved aside and in we went. Slick. 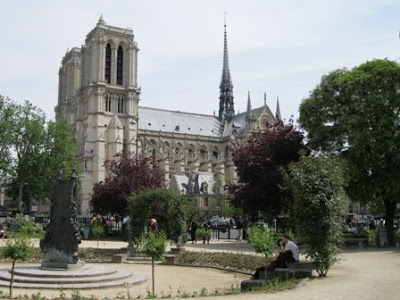 Set in a typical basilica floor plan – think of a big cross – there is a long central room flanked by huge columns where mass was in full play. We tourists were routed around the ambulatory like medieval pilgrims but with better dental plans and cleaner armpits. 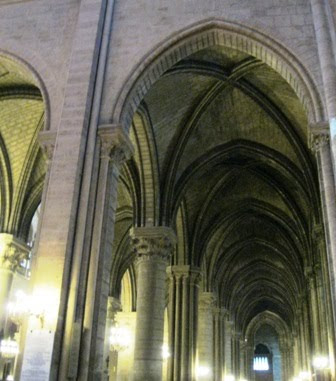 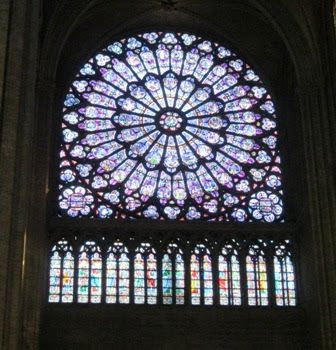 Around the edges are little naves with various statues of saints surrounded by flickering candles. I have a little tradition for when I visit cathedrals and churches in Europe. Having been raised as a fully functioning Catholic (8 years of nuns, every sacrament except last rites, mental scars that will never heal), I am now retired and stay clear of anything requiring burning incense. But when in these ancient monuments to organized religion I light a candle for my Mom, Dad, and grandmother Roro. So I did that for them in the magnificent Notre-Dame in the heart of Pari. I told them I missed them and was thinking of them. Rituals. I think it’s OK to hold on to a few. (Swallow lump in throat and move on…) Ted and I escaped fairly quickly and headed out. We snagged a fresh baguette and then lucked onto a Wine Cave and purchased a nice bottle from the Cotes de Rhone region. We sat in a little park on the left side of the Seine across from Notre-Dame and had a lovely picnic. A theme that seems to continue on through this journey. It was while sitting there enjoying the moment that I noticed how cool Notre-Dame was from the outside. The flying buttresses give the whole building such a striking look and feel. It was another of those “I’m really in Paris” moments. I don’t know, could have been the wine though. 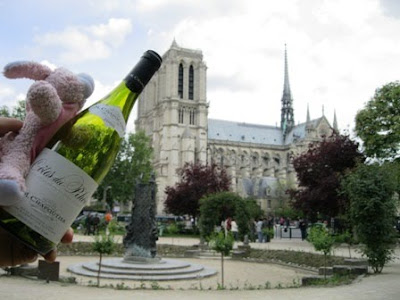 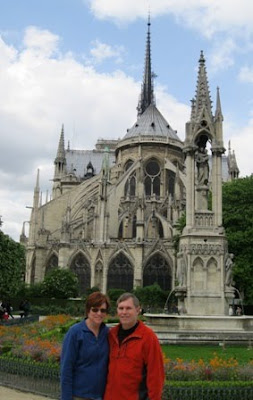 Time to re-group, so we made a quick stop at a patisserie for a chocolate croissant and some other confection filled with strawberry jam. We ate those while walking to the meeting point, then it was on to the Musée d’Orsay which houses French art mainly from the 1800’s (again, really old stuff). This is the haven of Impressionism – bright colors, sunshine on fields of flowers – think a photograph viewed through a haze of acid. I saw works from some of my favorite artists including Monet, Gauguin, Van Gogh, and Cézanne. For me, the best part was seeing Vincent van Gogh’s self-portrait. For Ted, it was works of art featuring naked women en flagrante as it were… I bet that surprises no one.

As if this day was not chock full of stuff already…a few of our new friends, Bob and Marolyn plus by then we’d captured Kathleen and Betsy, all metro’d with us over to Rue Cler, a nice pedestrian friendly street with plenty of cafés. We snagged a table and got to know each other over a glass of wine. Go figure. BR joined us while catching up on some reading. 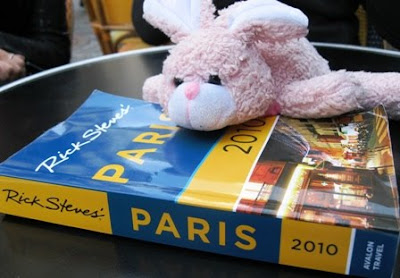 Next back to the hotel for a quick nap to re-charge and then gathered for happy hour in the lobby. By then our group within a group grew to include Benny, Tzu-Chen, and Chris our guide. We headed up to Montmartre – Paris’ highest hilltop. By then it was evening and the lights were coming on. All 11 of us had a nice meal at L’ete en Pente Douce restaurant. I finally got my first real food of the day – a creamy quiche with ham – makes you drool, doesn’t it. I practically licked the plate clean…;) 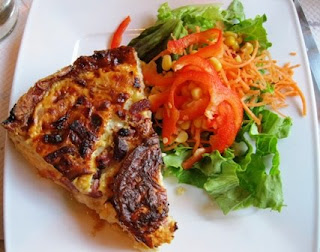 We all climbed up/down the massive stairs to the top of Montmartre (more exercise to counteract all that wine – cool) to see the Sacré Coeur basilica above and Paris laid out below, all lit up as the true city of Light. 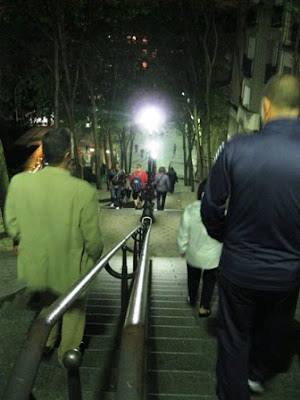 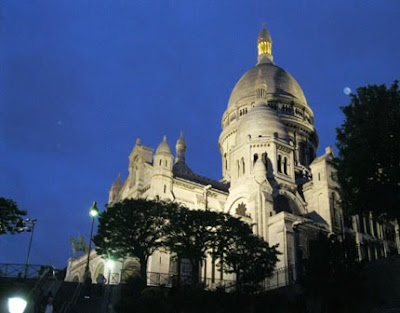 The Eiffel Tower did it’s light show at the top of the hour. Much walking, crepe filled with Nutella, and a long walk and metro ride home to Hotel Castex. Finally made it to bed around 11:30pm.