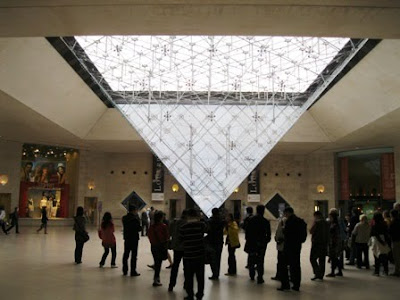 I was worried that our first encounter with the Musée du Louvre would result in sensory overload. For the oldest, biggest, and possibly the most crowded museum in all of Europe you need at least a week to do it justice. So I was happy to have a local guide to take us on a tour of the more famous masterpieces. 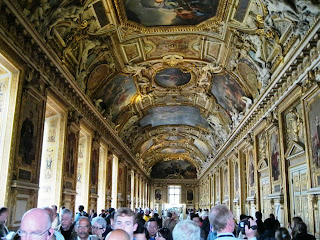 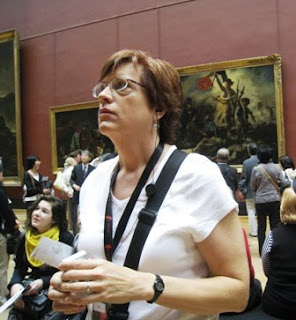 First up were the Italian collection of Renaissance paintings in the Grand Gallery. Basically, in this period artists were going for realism as they had come out of the Dark Ages and needed a little pick-me-up. A lot of their stuff has to do with religion – heaven, angels, virgins with children, etc. – but they kept at it and eventually got around to revolution, blood, guts, glory…that kind of thing.

Of course my favorite engineer and master of Italian Renaissance is Leonardo da Vinci. The Louvre has a great collection of his paintings including the beautiful La Vierge à l’Enfant avec Saint Anne (Virgin, Child, and St. Anne). 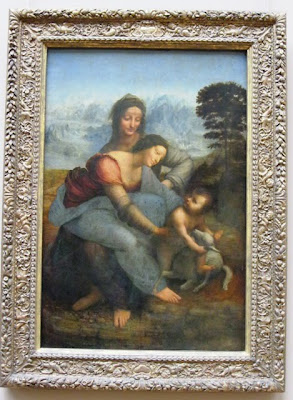 But then there’s the mysterious Mona Lisa…totally encased in glass, smaller than you’d think, and surrounded by a big crowd of camera toting tourists. I was able to elbow my way to the front and commune with my Lady Lisa. I like her – she’s cool and aloof. We have a funny little family story that in the early 60’s this painting was touring the US and my mom was determined to see it. But unfortunately she went into labor with her 6th child and missed her chance. So that’s why my little sister is called Lisa. I’m glad mom wasn’t so pissed that she called her Mona instead. 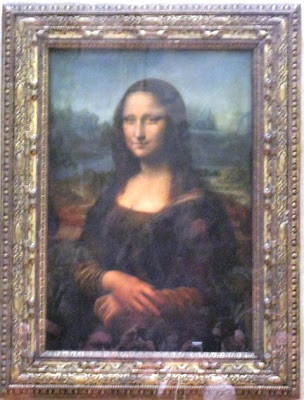 We moved into the Romantic collection next and found Le Radeau de la Meduse (the Raft of the Medusa) by Théodore Géricault. I really like this one. It has intense emotion in the desperation of the shipwrecked crew, and artistic motion as it draws your eyes from the dying at the bottom of the raft to the hopeful at the top of the pile as they see a sail in the distance…apparently cannibalism (human pâté) is fine in France. 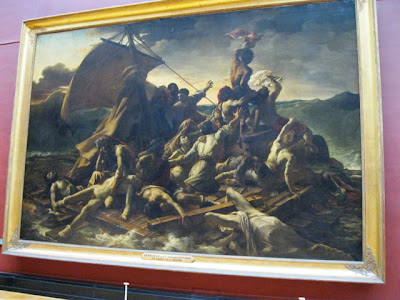 My next favorite is La Liberté Guidant Le Peuple (Liberty Leading the People) by Eugène Delacroix – probably his best known painting – commemorating the French revolution of 1830 (one of many French revolutions…). She seems to be urging the rabble on – to liberty, equality, and the brotherhood of all. Maybe that was Delacroix’s idea anyway. This painting also reminds me of Cloris Leachman in Mel Brooks History of the World Part I. 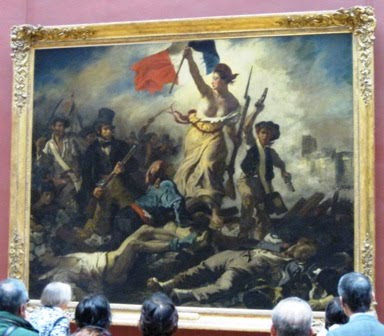 Next we entered the Salle Daru and viewed Neoclassical stuff. This room is totally dominated by the over-the-top Coronation of Napoleon by Jacques-Louis David. After conquering all of Europe, Napoleon couldn’t just be crowned king…no, he had to anoint himself Emperor. Set in the Notre-Dame Cathedral, the little guy had the Pope flown in for the ceremony but snatched the crown out of the pontiff’s hands and crowned himself. Everybody and anybody is shown in this huge painting. I even think the guy over on the left (next to the Ladies in Waiting) looks a little like Ted. 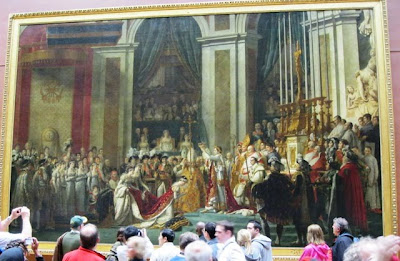 As our senses began to numb over we came upon the statue of Les Trois Grâces (the Three Graces – also known as Gail, Jenn, and Brenda) by some unknown artist. Ted really liked this statue. 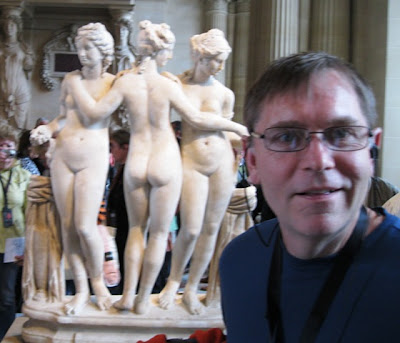 Finally we came to the beautiful, ancient Greek statue of Venus de Milo – widely renowned for the mystery of her missing arms. 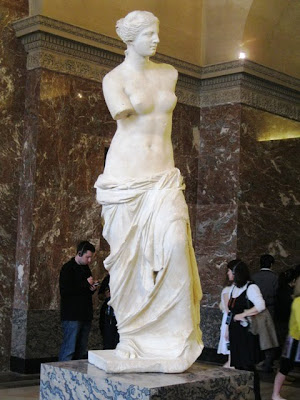 Last that day we came upon a most interesting work of art – seemingly a female nude lying gracefully on a cushioned bed. She is in repose, resting from a hard day of labor.

Walking around the statue to the other side you get a different story. Was the artist confused? Did he covet his neighbors wife or brother or both? Now I know where the term Hermaphrodite came from…right here in the Louvre. 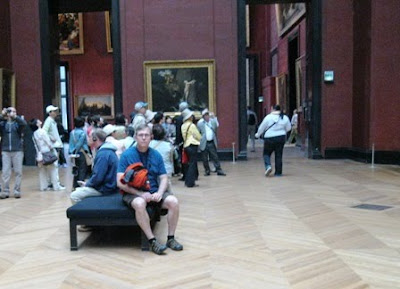 After our tour we escaped with Bob and Marolyn for a quick lunch in the Latin Quarter. Food was so-so but fellowship was great and the wine was fine. Ted and I then did a speed march through Ile de la Cité and Ile St. Louis, gathering picnic supplies as we worked our way back to the hotel.

The day ended with a boat ride on the Seine with a group of our new friends. Great view of the Eiffel Tower all lit up. More wine, more stories, good time. 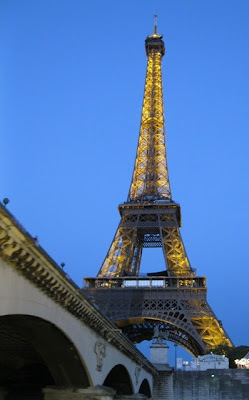 Well, that gets us through Monday. 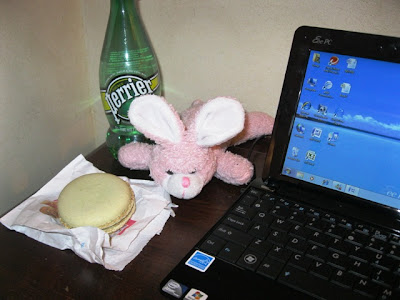